Pruning is essential to keep your trees and shrubs in good shape, but it can be intimidating if you’ve never pruned before. Once you learn the fundamentals, however, you’ll realize it isn’t as hard as it may seem.

The first thing to look for when pruning a tree is broken, diseased or dead branches, all of which should be removed to preserve the overall health of the tree. The next thing to be concerned with are suckers and water sprouts. Suckers can be either bottom suckers coming from the root system or growths originating from the trunk. In either case, they reduce water and nutrient flow to the main portion of the tree and should be removed. Another problem growth is called a water sprout, which is very noticeable because it grows straight up from a branch. Water sprouts also rob water and nutrients from the tree.

After all of these problems have been corrected, a second look at the tree should let you know what other limbs should be removed. Removing large limbs is perhaps the most difficult part of tree pruning. It requires two cuts in which one cut removes the weight of the limb and prevents tearing of the bark. The second cut is made closer to the trunk and removes the remaining stub, but should be no closer than the branch collar. Smaller limbs may also be removed to help preserve the desired shape and size of the tree if needed.

Many deciduous shrubs can really benefit from annual pruning. Pruning not only controls the size of these shrubs, but it can also increase flower production and encourage colorful bark.

Let’s begin with a few of the more common shrubs, such as lilac, forsythia and weigela. These shrubs are most commonly known for their flowers, so we should prune them accordingly. By removing a portion of their oldest stems entirely we can encourage younger growth, which will give us more flowers. Plants such as red and yellow twig dogwood have colorful stems which can be enhanced by removing the older gray stems. Another group of plants that benefit from pruning are the spireas and potentillas. These plants are treated a little differently in that they are cut down to about 4 or 6 inches in the fall or early spring. By pruning them this way, we increase their flowering and yet remove all of their twigginess that would look unsightly throughout the winter and early spring.

There are many other trees and shrubs that require more detailed pruning recommendations and careful guidelines. Please email us your questions or stop by the store, we always have people available to answer your questions whether they involve specific plant recommendations or which pruner is the right one for you and the pruning job you need to do. 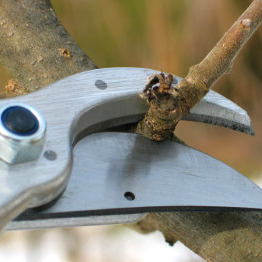