Yes! Hilltop is open and we are here to help.

In order to help ease the stress many are feeling at this time, we will be offering free local delivery on orders of $75 and a reduced rate delivery for non-local customers. In addition if you prefer, you can place your order by phone, pay by credit card and we will place your order outside for a no contact pick up. We understand this is a hard time for many, so if there is anything else we can do to support you, our community, neighbors and friends as you have done for us, we will try to help in any way we can.

Thank you for your continued support at this crucial time, and we look forward to seeing you all very soon.

Have you noticed little black gnats flying around your houseplants or outdoor potted plants? These are probably fungus gnats. These can be a serious problem in commercial greenhouses holding thousands of plants but are easily controlled by homeowners who take appropriate steps for eliminating these pests.

As weak fliers, fungus gnats live in and around damp decaying material. Plants with fungus gnats are usually being overwatered. This is the primary cause for an increase in the gnat population, as they thrive in wet, organically-rich soil. Gnat grubs nibble on the tender roots of houseplants, but they do not generally do enough damage to severely harm the plant – they are more of a nuisance as they mature and fly around the plant. These gnats do not bite, but they can be annoying. When an infestation is bad, they can quickly spread from plant to plant, making them even more challenging to control.

Letting a plant dry out between watering will decrease the decay and fungus in the soil, making the pot less hospitable for fungus gnats. Always make sure pots have adequate drainage and that water is not left standing in saucers. Adding a porous top-dressing, such as sand or gravel, to the pot can also help water drain away from the surface so the gnats cannot burrow down to the organic richness they crave.

For home use, insecticidal sprays with Pyrethrins are available and can be used against fungus gnats. If treating a houseplant, be sure to take plants outside and follow label instructions carefully, keeping the chemical away from children and pets at all times. Bacillus thuringiensis (BT), a biological control, will also provide relatively fast control killing the larvae in the soil.

For houseplants, the easiest and fastest remedy is often the best. Repot the infested plant using new potting soil into a pot with drainage. Carefully rinse the plant’s roots while repotting to remove as much soil as possible, and be sure the new pot’s hole is not clogged. Prune away any dead roots, leaves and stems. The gnats will be gone immediately.

Fungus gnats certainly aren’t fun when they infest your plants, but fortunately there are many ways to keep these bugs under control or eliminate them entirely. Using several techniques at once will be most effective, and the gnats will be gone just as fast as they first appeared. 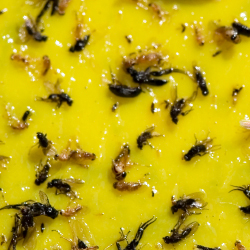 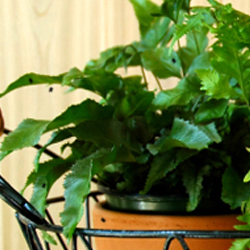