Have you enjoyed dill? An often overlooked herb, dill deserves much more attention in both the garden and the kitchen than it normally receives.

This cool season plant is best when planted in very early spring or in late fall. Dill does best when planted from seed, because it doesn’t transplant well. Simply scatter seeds in a container on the patio or in the garden in early spring. Dill plants grow best in full sun. Other than this, dill will grow happily in both poor and rich soil or in damp or dry conditions, making it easy to add to any garden. One of the benefits of growing dill is that both the leaves and seeds of dill weed plants are edible.

When the daytime temperatures reach the mid to upper 60s, your dill will bolt, meaning it will put up seed shoots and go to seed. There is not much you can do to prevent this because the plant wants to set seed for the next season. Gather the ripened, dry seed for use later, or scatter the seeds immediately on the soil for another crop. Often you will get a crop in late summer that lasts through the first hard freeze, when the plant finally dies.

Dill is an annual, although the scattered seed will produce new plants the next season. Dill weed, or the leaves of the dill plant, are also easy to harvest and dry so you don’t have to go without dill in winter. Simply cut leaves and lay them on newspapers indoors, out of sunlight. In about a week the dill will be dried and you can put it in an airtight container to use later.

Dill can easily be used in marinades and rubs, and it can season soups, stews and even breads or crackers. If you want to extend your dill palate a bit further, try these delicious recipes!

Place the potatoes in a steamer basket, and set in a pan over an inch of boiling water. Cover and steam for about 10 minutes, until potatoes are tender but not mushy.

In a small bowl, stir together the butter, dill, garlic and salt. Transfer the potatoes to a serving bowl and pour the seasoned butter over them. Toss gently until they are well-coated. Serve immediately.

Once you taste dill, you’ll be curious to include it in many of your favorite recipes. Get planting and grow your own dill today! 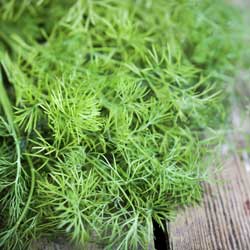