Yes! Hilltop is open and we are here to help.

In order to help ease the stress many are feeling at this time, we will be offering free local delivery on orders of $75 and a reduced rate delivery for non-local customers. In addition if you prefer, you can place your order by phone, pay by credit card and we will place your order outside for a no contact pick up. We understand this is a hard time for many, so if there is anything else we can do to support you, our community, neighbors and friends as you have done for us, we will try to help in any way we can.

Thank you for your continued support at this crucial time, and we look forward to seeing you all very soon.

It’s hard to forget the years that we’ve been plagued with Japanese beetles. These ravenous creatures can destroy your lawn, garden and good nature in one season by eating away precious time and money invested in our landscapes. As they know no boundaries, Japanese beetle control methods are most effective if neighborhoods band together in their efforts. So, rally the troops!

Japanese beetles are a problem at two stages of their life cycle: larvae and adult. The larvae, called grubs, are actively feeding from August through October and again in April through May. It is during this time that the grubs are closest to the soil surface feasting on plant roots, especially grass roots. A heavy grub population will result in dead patches of turf that can be lifted like a carpet. Japanese beetle grubs are 1 ½” long, C-shaped and white with a brown head. When gardening, you will almost always find some grubs in the soil. Small populations of grubs can be present in the soil without significant damage to the lawn. If you notice more than a dozen per square foot, however, this constitutes a problem that should be dealt with.

Adult Japanese beetles have a hard-shell body that is about ½ inch long. They are metallic-green and copper-colored. At this stage, beetles can decimate a plant in record time by skeletonizing the leaves – nibbling off all the foliage between the veins. Adult beetles start to emerge from the soil with a frenzy of feeding, mating and laying eggs. You will find adults feeding in groups in full sun, and they feed on over 300 different species of plants. These insects maintain this frantic level of activity through the first half of August. The females lay their eggs on the ground. When the eggs hatch they dig their way into the soil to feast on plant roots in preparation for winter. As soil temperatures decrease the larvae move deeper into the soil only to resurface and feed on plant roots again in spring.

There are several methods to control both Japanese beetle grubs and adults, some environmentally-friendly and some more harshly chemical. Always read pest control labels in their entirety even if they are listed as organic or environmentally-friendly. These labels are meant for the protection of you, your plants and the planet.

When using any chemical controls, read the product label completely and follow application instructions meticulously. It is a good idea to use a spreader sticker so that the chemical will adhere to the plant for the greatest effect. Popular chemical options to control adult Japanese beetles include…

For truly effective Japanese beetle control, it is also necessary to control the grubs. This can be done in a number of environmentally-friendly ways, such as…

Chemical controls can also be effective at minimizing the harm from Japanese beetle grubs. Good options include…

With so many options for effectively controlling these pernicious insects, there is no reason why you need to keep being bothered by Japanese beetles. Once you know more about these insects and their habits, you can easily keep them away. 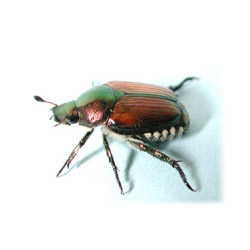